When it comes to mountains in the USA, there are very few bigger than Mt. Whitney. At 14,505 feet, it is the highest point in the lower 48 states and attracts hoards of climbers from all around the world. On September 16, 2019, I finally had my turn to try and conquer this beast.

As you know, Mt. Whitney hikers are forced to go through a lottery system, which prospective climbers have about a 30% chance of pulling a permit. For me, I was lucky enough to pull a permit this year, unfortunately, the day I pulled turned out to be a dud when it finally came around.

My group of Kevin, Joe, and David met up at Whitney Portal Campground on Saturday Sep. 14th and immediately setup camp. This is a very nice campground and while the forest service makes it sound like it is infested with bears, we saw none and no sign of any. If you are into fishing, Lone Pine Creek is stuffed with 10-12″ Rainbows and tiny German Browns. The pond up at the Portal is also planted with trout.

The next day we rolled back into Lone Pine and picked up our permits and crap bags at the ranger station. Here we confirmed the weather reports we had been getting and the rangers made sure to strike fear into us about using common sense. In fact, they told us that getting to Lone Pine Lake under the forecasted conditions would be considered a win.

After a quick stop at Mobius Arch out in the Alabama Hills, we made our way back up to the Portal and started getting ready for that nights assault on Whitney.

Later in the day, we heard at the store that they were pulling the rangers off the mountain in advance of the weather system, which was now forecasting 50 mph winds at Trail Camp and 75+ mph winds on the summit and snow.

That evening we had a hearty dinner – bison steaks and baked potatoes and we got off to bed with our alarms set for 1 am. I don’t think I slept more than an hour and was ready to go when the alarm went off. By the time we got on the trail, it was 2:30 a.m. With my pack weighing in at 25 lbs., we set off into the dark with our lights and a nearly full moon. The weather felt great in the 8,000 foot level and I was actually kind of hot. There was no wind at all and were reveling in this false hope that the weather man was wrong. After about 30 minutes we had clicked our first mile and caught up to the headlamps that had been a couple switchbacks above us. The trail was graded nicely and very easy to follow under the moon light.

We started getting a bit higher and as we did, the wind started picking up. By the time we got into the forested areas at 9,900 feet around Lone Pine Lake, the wind was really starting to gust. From here on in, it only got stronger and colder. By the time we hot Outpost Camp, we already started running into people that had turned around above and were heading back in the dark. We kept pushing on despite the abuse we were taking. The pace of our group slowed a bit in the 11,000 foot range as the slog up to Trail Camp was a tedious climb. However, during this stretch we were treated to a gorgeous sunrise.

Consultation Lake came into view and we reached Trail Camp by 7:30 a.m. With all the tents being blown sideways and all over the place, it looked more like a battlefield than a campsite.

There were people everywhere here. Some taking on more water, others deciding whether to go on or turn back, and many licking their wounds after turning around further above. The winds here were sustained at 40 mph with gusts hitting above 50 mph. Folks we talked with that camped here the night before had a rough night. Two guys even said their tent poles broke, everyone else just froze their butts off during a long sleepless night at 12,000 feet.

We sat here for awhile and took in as much intel as possible, but the thing we knew was the wind was coming out of the west and we were sitting on the east side of the mountain, 2,500 feet below the summit. If this is what we were getting behind a 2,500 wall for protection, we could only imagine what it would be like at 13,000 feet up on the ridge above us.

It was here that we made our decision to turn back. This was a tough decision for me as I wanted this summit bad. After all the time in the gym and the training hikes I put in, it wasn’t going to be my body that failed me. Unfortunately, it was going to be Mother Nature. If the weather reports, on the ground experience, and accounts from other hikers wasn’t enough to stop me. It was clinched for me by what David said. He had been successful on 5 of 7 Whitney ascents and I valued his expertise and wisdom greatly. When he said it was going to be awful and dangerous on the switchbacks and the ridge, that was all I needed to know.

As we decided to turn back, my cousin Joe decided he was gonna go for it. We took some extra stuff from his pack and I gave him my Inreach so he could contact us. Of he went.

We were definitely worried about him during our entire ascent and even more so when two search and rescue guys passed us heading up the mountain. Other than that, we made good time going down and were hit with hail and rain.

By the time we hit the bottom, we had tagged 14.6 miles and 4000 feet of gain, basically 2/3 of what we had set out to do. It was a tough pill to swallow, but the mountain isn’t going anywhere and it will give me reason to train hard into next year.

Around 2 p.m., Joe sent me a message that he had made the summit, 12 hours after we set out. We met him back at the trailhead around 7:30 p.m. which put him on the mountain for almost 18 hours. We also talked to a guy from Scotland that made the summit. He threw caution to the wind since it was his one chance to summit on his trip.

This brings me to a huge flaw in the Whitney permit system. I understand why they have it, everyone knows that there are too many damn people in California, but it forces people to make stupid decisions based on their day to hike.

It was extremely stupid for anyone to be on that mountain that day, yet well over 100 people were. Heck, even the national forest rangers left their post on the mountain. If anyone saw a similar weather report and had planned to do Mt. Langley or Mt. Williamson, anyone with a right mind would scrap those plans immediately. However, you get a permit that says you have to hike on Sep. 16th and you throw out common sense and start up the mountain. The real kick in the bean bag was that the weather was beautiful Saturday and Sunday. It was going to be decent on Tuesday and through the rest of the week, leaving Monday as the bad day. The ranger station should use discretion and allow hikers to go up on a different day if they so choose when the forecast leading up to the day looks bad. We heard that there have been 80 rescues on Mt. Whitney so far in 2019, that’s a lot! It’s also a number that would greatly diminish if your permit didn’t force you to attempt it on a crappy day.

Even though we didn’t reach our goal, it was still a great experience in some of the most amazing country my eyes had ever seen. The people on the trail were all really cool and the elements helped forge a common bond with everyone we passed along the way. Here I am a week later and writing this it still stings, I hate leaving unfinished business and that’s what Mt. Whitney is to me now. I’ll stew on it until next summer when hopefully I can pull another permit so I can finish my assault on Whitney.

Previous Story
Pyramid Peak: The Gem of the Desolation Wilderness 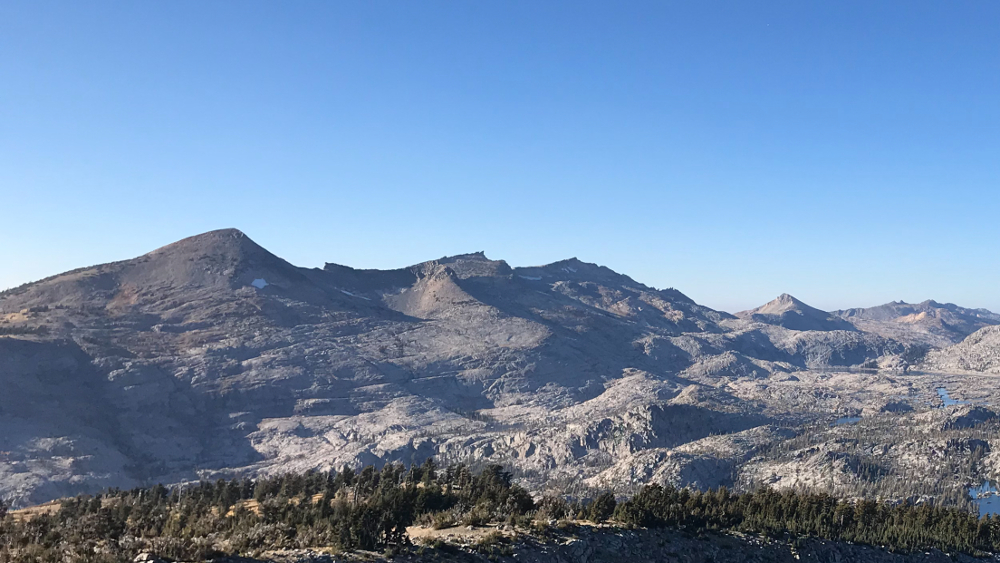 Next Story
Hiking The Great Basin